When in Rome is a Time Management and Strategy game for PC published by Realore Studios in 2013. Play as a brave warrior!

Play as Flavius, a young brave and energetic guy who is asked to struct the important buildings for the empire. 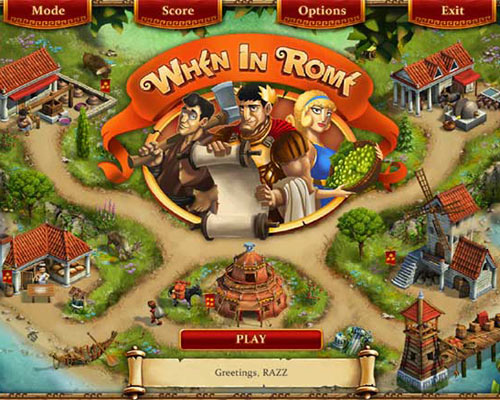 Realore introduces a brand new strategy game where players can put themselves in the shoes of Flavius, experienced Roman warrior who had to retire and needs to build a new life for himself. After he got injured, Flavius is sad and lonely, he can’t be a warrior anymore and he is not wealthy. Meanwhile, the Roman Empire prospers and the Emperor decides to expand territories. He assigns Flavius a position of instructor for those who will build new settlements and towns, and take care of farming lands.

Make Flavius’ dreams come true! Travel across 41 challenging levels, help locals along the way, and organize production and delivery of various goods. When in Rome, do as Flavius does.

Don’t discourage the king. Use all of your experiences at works. If you were successful at building the roads, the Emperor will send you to new wars. It would be a new beginning for his life. Also, you have to clear the roads like the king’s passage. Don’t forget to prevent bandits from robbing the royal carriages! Otherwise, The mission will be failed. Rebuild the damaged roads such as bridges. This is one of your important duties at When in Rome.

Features of When in Rome: