Viking Saga New World is a Time Management game for PC published by Realore Studios in 2014. It is the age of Vikings and time to stretch their legs!

As Ingolf wants to become the new king of Iceland, the enemies who are against this is ruining the kingdom. 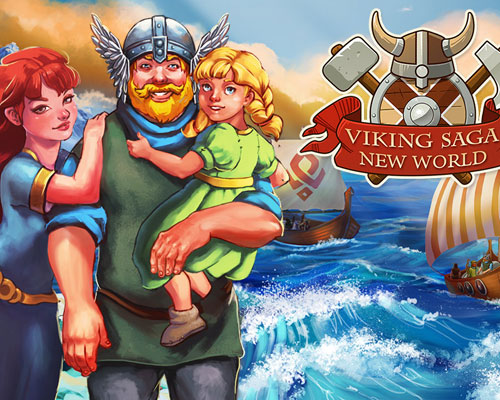 Help the Viking king find a cure! Several years have passed since Ingolf became the king of Iceland. He married his beloved Dalla and they gave birth to two beautiful children. The lands of Ingolf prospered and grew. But one day a terrible danger came to the lands of the brave king. An unknown disease started to spread across the kingdom. To save his family and his people Ingolf will have to travel to the lands of the far west and find a cure!
Travel to the far lands of the west! Visit wondrous corners of the ancient world! Meet new interesting characters and learn their intriguing stories! Find a cure and save your kingdom!

In that case, You can easily finish the quests by working together. There are different types of weather system for Viking Saga New World. When it’s snowing, Your work will become harder than before. You have to be a hardworking player to win the levels at these weather type. There is a story mode for the players who like to know the story. But if you don’t like to play this mode, There are other challenges too. These challenges can be completed to get rewarded.

Time is really important at this enjoyable game. If you lose it, There won’t be any extra time in the levels. So, That level has to be played from the beginning. There are some achievements at this Time Management game which can be achieved by the players.