Super Blood Hockey is a Sports game for PC published by Loren Lemcke in 2017. You can’t defeat your rivals? It’s ok, kill them! 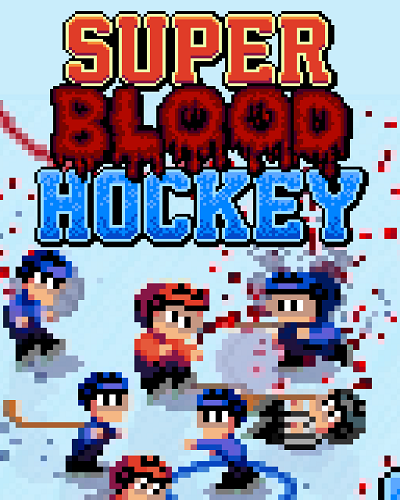 Travel back to a time when sports games were all about the action. Customize your lineup and use superior skating, positioning, strategy, and violence to assert your dominance on the ice. Experience brutality on ice like you’ve never witnessed before: blood splattering collisions, brain-scrambling head injuries, bloody vomiting spells, and violent seizures. Enjoy the driving retro beats of an original soundtrack by chiptune Shawn Daley.

Paint the ice with the blood of your friends! Take on the world in a global ice hockey tournament. Failure to secure victory for your nation could result in your execution. Conquer a variety of difficult challenges (4 vs. 8, manual goalie control, etc.) and fun scenarios (12 vs 12 Mega Rumble, Turbo Mode, etc.). The release is not the end! Voice your opinion in the discussion forum and tell me what else you would like to see in the game!

With clear inspiration from Ice Hockey of the NES days, this game takes it to a comically violent end. The pace is frantic, players and referees fall down constantly as they face a barrage of body checks. The goalies are surprisingly effective and turn away the vast majority of shots, which is strange in an arcade-inspired sports title. Thinking back to the good ol’ days of Wayne Gretky’s Hockey 3D the goals were fast and furious, here it’s more a clusterf*ck of bodies causing havoc all over the ice.