Storm in a Teacup is a Causal, Platformer and Adventure game for PC published by Cobra Mobile in 2012. Control the storm!

Play as a keen little young boy who loves to have an adventure on his teacup. 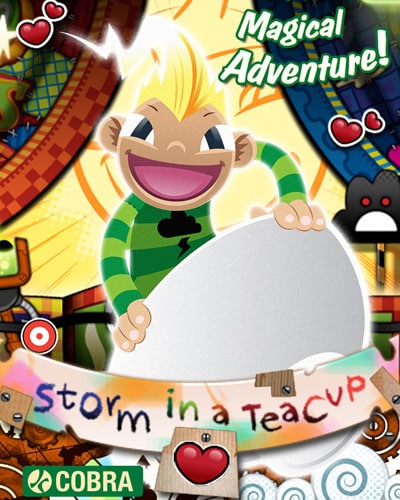 When you’re riding a teacup, Everything seems enjoyable to you. Because you’re in dreams. There are some white cubes on your way as scores. When you collect all of these cubes, It means that you earn total score in a level. Storm in a Teacup has fantasy world full of colorful environments. Even the obstacles don’t seem dangerous on the surface. This Casual Adventure game also includes fifty challenging levels with some puzzles. The puzzles are easy to solve.

Five other survival levels are included at this game to challenge your abilities more than ever. The players can customize the teacup with the earned white cubes. Although there aren’t so much options for customization at Storm in a Teacup, But you can have your own teacup with it. This game has simple controls too. It means that even the beginners players can learn how to play less than a minute! If you’re ready, Take the role of this cute character on his great adventures.

The players who don’t like to play Storm in a Teacup with a keyboard, There is an option to play it with a gamepad easily. You can download this casual game for free on FreeGamesLand to have hours of fun!

Features of Storm in a Teacup: