Quest Hunter is an Action, RPG and Adventure game for PC published by 2 Zombie Games in 2017. Wanna some treasure to collect?

You are going to play as a young boy who is after treasures and trying to become rich. 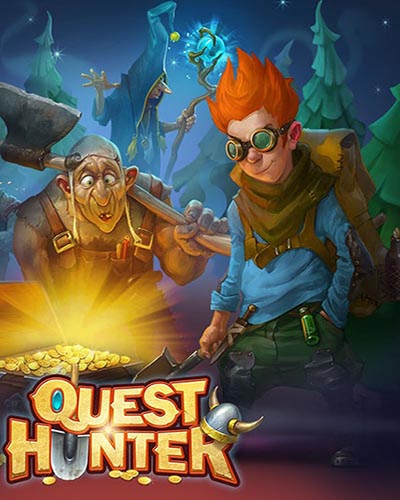 Welcome to the Dark World. The world that is ruled by its own laws. The world where fire is the main treasure, and a shovel is a loyal friend and assistant. There’s enough trouble for villains here but there’s double trouble for heroes. Quest Hunter is a story-driven RPG with treasure hunt, non-linear dialogues, puzzles and humor! Mysterious world, fascinating plot, interesting puzzles and insidious enemies are waiting for you!

Story-driven RPG: influence the storyline, choosing the answers in the dialogues. Untangle the insidious plans of your enemies and bring them out into the open. Save the world from the eternal darkness! Cooperative mode: play the game online with your friends. Fight against evil shoulder to shoulder or make a mass grave in the enemy’s lair! Random generated dungeons: try your luck, see if you can find the way out of the dungeon. Where could it be this time? Who’s waiting for you around the corner?

Quests and puzzles: move, turn, light, switch over, dig up… In short, solve a variety of quests and puzzles. Search for treasure maps to become the richest man in the camp! Skills and super powers: upgrade the character attributes and explore new skills. Become an invincible killing machine and turn your enemies into dust!