Micro Mages is an Action game for PC published by Morphcat Games UG in 2019. Cooperate with friends to over come the challenges!

A platformer game where you can team up with up to 4 people to pass the levels with each other’s help. 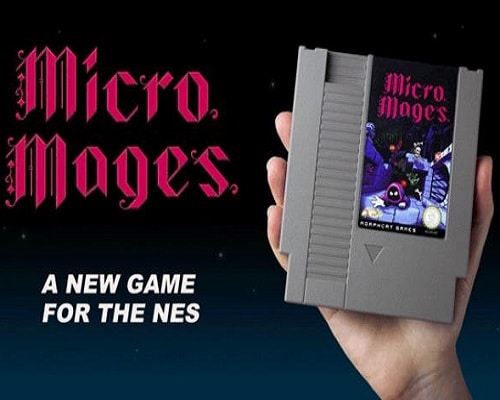 Micro Mages is a platform game developed for the original 8-bit NES console. Slip into your wizard robes and enter the Demon Fortress, home of great treasure and ghastly creatures alike. Shoot and wall-jump your way up the fortress’s towers and battle the evil bosses lurking at the top.

Play solo or join forces with your friends. This game supports up to 4 players. Will you help each other overcome the dangerous traps built to stop nosy adventurers or will you turn on your comrades to snatch the high score? No downtime: If you die while at least one other player is still alive, you will turn into a ghost and can help by freezing enemies. Try to open crates and treasure chests to find a Fairy or Feather that will bring you back to life.

Micro Mages is a Nintendo NES game in 40KB, which was the size of a standard NES ROM cartridge when the NES was first released (and the same size as the original Super Mario Bros). Later NES games would take advantage of bank switching to use bigger ROMs. At the time of writing Morphcat has only put the game trailer on the Steam store page, not their other far more popular video which shows exactly how they fit the game into 40KB. It really is an incredibly well made video