METAL SLUG X is an Arcade and Action game for PC published by SNK Playmore in 2014. Fight the enemies with your brave heroes!

You are going to select your brave hero and then stand against the enemies with their powerful skills. 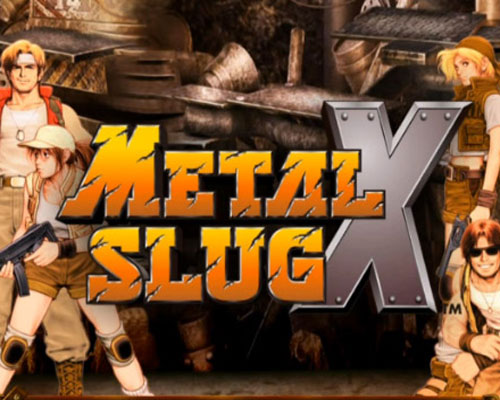 The player should pick a character among four soldiers. The enemies are getting closer to the city. They have many modern equipment. If you don’t stop them, They will easily enter the cities. Then, They will destroy everything on their way. At first, There is a normal weapon for the players. This weapon’s bullets are unlimited. So, You can easily use it forever! But it doesn’t make great damages on the enemy soldiers. It’s necessary to look for a better one.

There are some people who are captured by the enemies. When you release them, They will give you some items like weapons. It depends on your chance to get the best things. They may only give some fruit. They may also give you powerful gun with limited bullets. If you get this kind of guns, Don’t waste the bullets. Some of them can destroy even a tank with only one shot! It’s good to use this kind of items for the boss fights. The boss fights can be seen in the end of the levels.

There are two types of game modes for METAL SLUG X. Arcade mode and Mission mode are the names. In the first mode, You can easily use all of them items to fight the soldiers. But in the second mode, Some serious missions will be given to you. If you finish them successfully, The next missions will be available at the list.