Kingdom is a Strategy and Simulation game for PC published by Raw Fury in 2015. Rise and protect your kingdom and people from enemies!

Rise as a princess or a prince who wants to save its kingdom alone just with a horse in a beautiful pixel game. 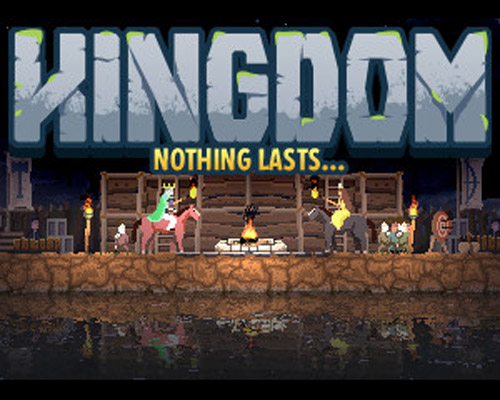 In Kingdom, each coin spent can tip the balance between prosperity and decay. Attend to your domain, border to border, or venture into the wild to discover its wonders and its threats. Master the land, build your defenses, and when the darkness comes, stand with your people, crown on your head, until the very end.

Gameplay – Kingdom is a 2D sidescrolling strategy/resource management hybrid with a minimalist feel wrapped in a beautiful, modern pixel art aesthetic. Play the role of a king or queen atop their horse and enter a procedurally generated realm primed to sustain a kingdom, then toss gold to peasants and turn them into your loyal subjects in order to make your kingdom flourish. Protect your domain at night from the greedy creatures looking to steal your coins and crown, and explore the nearby, mysterious forests to discover curious and cryptic artifacts to aid your kingdom.

There are other types of robbers that want to rob your castle’s treasury. You need to hire guards to protect the treasury against them. You will have some coins at first. Use coins to hire guards. You also can use coins to customize the character. It can be earned on the way by discovering special places. When you defeat some enemies, Extra coins will be given to you. Your horse needs for rest and food too! You can do this in the places that are designed for it.