Gish is a Platformer and Puzzle game for PC published by Chronic Logic in 2004. Get control of your little character who is made up of tar!

With the help of your girlfriend, you are going to revenge the monsters who have destroyed your home. 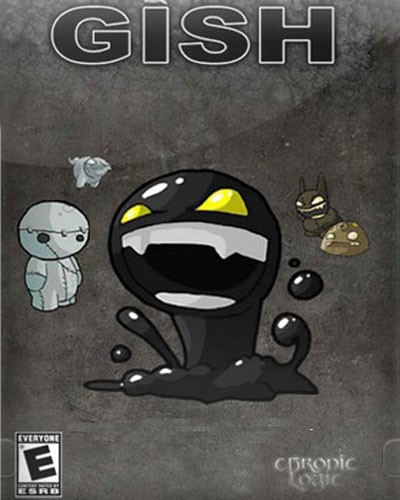 But she gets kidnapped by the enemies at first. That’s why you become a mad boy who wants to kill all of the enemies. As you are a ball of tar, There are some special abilities which no one has them. You can easily move from a place to another place. There isn’t any limit for you in movement. It means that you can pass all of the obstacles without any problem. But the enemy characters won’t let you live free. They will try to kill Gish with lots of plans.

Your character can also stick in the environments easily. This ability will be helpful so much for Gish. There are thirty four levels in story mode for this Puzzle Platformer game which can be really enjoyable. If you finish them, Another twenty level will be added to your levels collection. You can also get connected to the internet to download eighty four user-made levels. If you get bored of story mode in Gish, You can choose another mode from six choices.

This award-winning game also includes six powerful boss fights! The players need to get stronger enough to face these bosses. Otherwise, They will easily punch you on the face! That’s why the player has to improve the character’s abilities by scores.