Bunch of Heroes is an Action game for PC published by NGD Studios in 2011. Stop aliens from attacking to our planet Earth, which might fall!

You are going to become responsible for saving our planet Earth from enemies. Gather your team and lead them to victory. 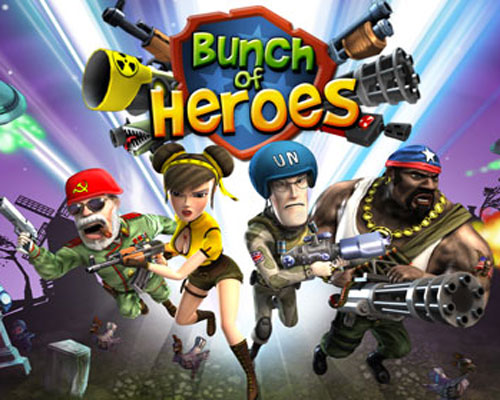 The Bunch is the most formidable team of elite fighters ever assembled from around the world. What brought them together? Well, obviously the Earth is under attack! An alien invasion is threatening all humankind, without regards to gender, color or nationality. And these nasty aliens have a powerful Zombie Army™ at their disposal!

“Bunch of Heroes” features stylized cartoon like artwork, funky rock and roll music, cutting edge technology, great humor and cooperative gameplay to inspire zombie killers and E.T. haters alike all over the globe! Four playable characters are enough to exterminate the enemies’ bases. Each fighter’s level can be upgraded by the experience points. Bunch of Heroes has 3D graphics for the fans of Action Shooter games. Now you can download and play this game for free in freegamesland.

Features of Bunch of Heroes: